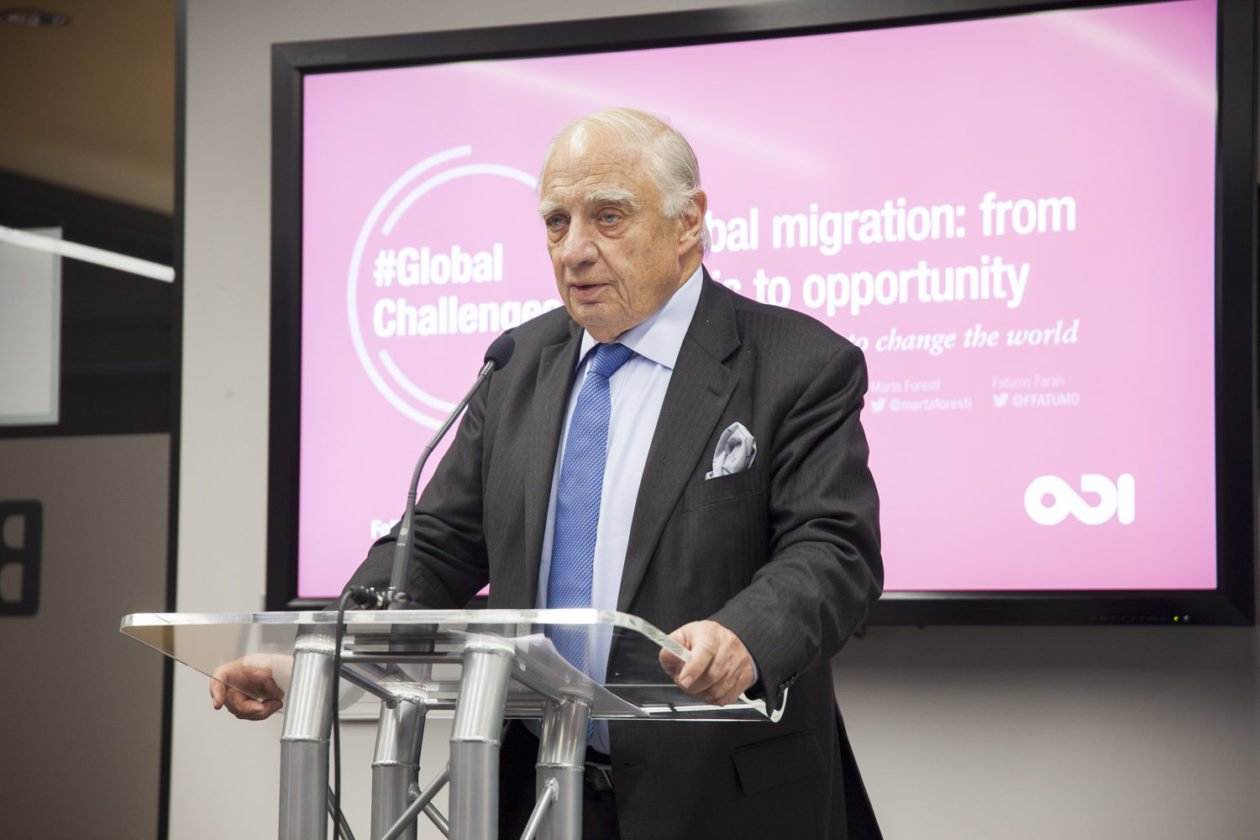 Peter Sutherland during a presentation at the ODI.

The decisive chance to rebuild the international migration system

The only option that Western civilization gave to itself, about amending everything which was unable to build, resides in Peter Sutherland‘s power of conviction.

Jurist, Catholic Irish, member of Attorney General and Council of State in the 70’s, and Commissioner of many different departments in Brussels from the 80’s on, Sutherland was named as World Trade Organization’s Director General in 1995.

He turned 70 on the 25th of April and is far from retire. On the contrary, he faces now one of the most important missions in his career: United Nations Special Representative of the Secretary-General for International Migration. As an economic counselor with strong liberal beliefs, his words show a powerful and unambiguous intention: “There is not a strength, neither trading nor capital flow, that has the power of changing lifes in a positive and sustainable way on a scale at which migration can do”.

Mr Sutherland, first of all thank you very much for taking part in this interview. Let me ask you with the first question: talking about the US, President Obama once described the US system as a broken migration regime. He described like that in an State of the nation. Would you agree with that statement?

I think that there is virtually no developed country that has anything like the degree of certainty and application of rights that is necessary to have a proper migration regime. The US is not different and the disputes already evident in the US presidential election underlined the fact as to the disagreements which are throughout the European Union.

So you wouldn’t find an essential difference between American migration regime and the European one? Or the Australian… for that matter!

In many ways, the US regime is, whatever its deficiencies, more certain clear and well managed than the European one. The problem with the European migration system is that there is no European migration system. That the member states of the European Union have consistently fractured and disagreed on how they would administrate it. It’s quite obvious to me that the only solution to the migrate, the partial solution, the whole problem cannot be done away with, but the only partial solution in Europe is to have, first of all, a common European policy, a common border policy, and an enforcement mechanism which is applied equally throughout the European Union and the sharing of responsibility and the basis of solidarity which is a core principal of the European Union in itself.

We tend to talk a lot about the refugee crisis, but as you clearly stated in your presentation, refugees are a minor part of a much prouder movement of human mobility where the migrants and their families contain the bulk of this. I understand that the work that you are doing is related with every single form of human mobility­ the economic migration is a relevant one­. To what extent do you think the discussion about the refugee crisis and, in a similar way, the way the US country campaign is taking us right now? To what extent do you think that this is facilitating an agreement on economic migration and to what extent is weakening it?

I’ m not sure that I understand all the implications of the question but I think that first of all, the rights of refugees, which are contained in the 1951 Convention, are sacrosanct. They cannot and should not be interfered with and we should not seek to redefine that responsibility. Doing so, would end up risking the requirement to grant sanctuary to those who need it. Because undoubtedly, any redefinition will try to restrict rather than expand. But apart from those migrants, there are different categories of other migrants, who cannot simply be dealt with on the basis of, saying, send them back because they are economic migrants.

I think that first of all, the rights of refugees, which are contained in the 1951 Convention, are sacrosanct. They cannot and should not be interfered with and we should not seek to redefine that responsibility. Doing so, would end up risking the requirement to grant sanctuary to those who need it.

I accept, and the UN system accepts, that there is no right to sanctuary and asylum unless you are a refugee. And therefore it is possible to send economic migrants back. I think that we have to develop a common European policy that recognizes that, within that general principle there are also different categories of migrants. There are those who should be entitled to humanitarian visas, that there are some who should be allowed to have temporary visas, that there should be obligations in regard to family reunions and so on. You cannot simply deal with this as a category that everyone who is an economic migrant should be sent home.

And do you think that the refugee crisis is taking us closer to a possible agreement on that? For instance, on a common migration policy on the European Union or on the contrary, this is taking us backwards on many of the rights that are already consolidated?

At the moment, it is taking us backwards. I regret to say that the European project which I deeply believe in and which is based on principles of the dignity of the human person and the equality of man, it’s not helped by a number of European prime ministers who, for example, have said that providing asylum to Muslims should not take place because they are Muslims. I mean, this is like living in the time of the Crusades, it’s Samuel Huntington’s Clash of Civilizations is facilitated by that type of rhetoric.

This morning you talked about sovereignty and its concept. To what extent do you think that we are at the verge of an ethical debate regarding the right to migrate, a right of the 21st century? To what extent the communitarian right of state to decide who enters and in what bases collides with the right of individuals to prosper even if that happens abroad?

It’s absolutely clear that whatever about the rights that should or could exist in regard to movement of people that the assertion of national sovereignty in this debate is in the ascendant, in other words, it is winning. So national sovereignty is being asserted in a way which is, in my view, contradictory to the essence of, for an example, the solidarity that should exist within the EU and it is being asserted on a nationalist basis which is damaging to the whole concept of the human person having equal rights.

Whatever about the rights that should or could exist in regard to movement of people that the assertion of national sovereignty in this debate is in the ascendant, in other words, it is winning.

Let me ask you briefly about the political alternatives. Many people consider the very painful institutional creation process of the GATT (General Agreement on Tariffs and Trade) and the WTO as a useful precedent for what is happening right now in terms of economic migration. There are new public private partnerships such as the GAVI Alliance that could be inspirational in this regard. What do you think are the alternatives? Where are the possibilities? Because we count on no precedents, there is not good agreement that could help us in this regard.

Well, I besides to take this role by Kofi Annan. He said that it was doing so precisely because I’ve been the founding DG of WTO. I have found, as many found, being director general of GATT has been a very difficult job to confront national sovereignty issues in the context of multilateral solutions. And this is difficult but so was concluding the Uruguay round. It’s all about globalization but we ultimately got there. But It actually happened. But It was only one part of the globalization process. The people is another part, and that’s what Kofi Anann sold to me when he asked me to take on this role. I don’t think it’s impossible to find institutional mechanisms in the multilateral system which exist in bringing about cooperation between people on vital human issues. I don’t believe it’s impossible because anybody with half a brain would recognize that there is no solution unless there’s a cooperative solution and institutions are vital to finding solutions. That’s why the European Union in itself was created. I firmly believe therefore that the impetus which we now find in having a series of conferences on the issue of refugees from Syria is the best way to proceed rather than allowing everybody to coward behind borders and to crouch in defense of national sovereignty.

What do you expect from your report, the report that you will be presenting by the end of this year, and the summit that has been combine on the 19th of September? What is it that we could ideally expect from it and the leadership that will be convened there?

Do you think that this will finally be part of president Obama’s legacy? That he will be able to make a difference in this area before of his term?

I hope it certainly will be part of the legacy of Ban Ki­moon, who will also see the end of his term and the year and this will be a major UN than ever. And hopefully also it will be helpful to inspire a legacy for Obama and that the two legacies can knit together in a constructive way.

This interview was made by Gonzalo Fanjul at the ODI’s office in London last February.