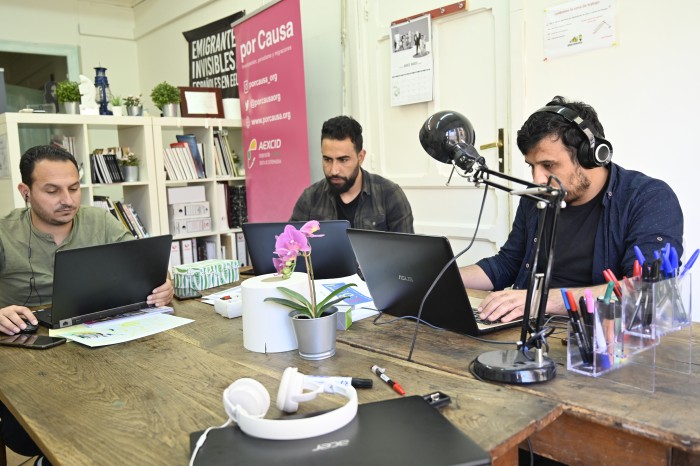 Muhammed has always loved soccer. When he lived in Syria, he used to meet up with his friends to watch La Liga’s matches, his favourite competition, and laugh and celebrate the goals of Atleti or Barça. He dreamed of being able to travel to Spain and enjoy a derby or ‘el clásico’ in person, not yet knowing that he would end up living in Madrid after fleeing the war that has been raging in his country for more than ten years.

At that time, when Muhammed started documenting the war, showing a reality that contrasted with the images that appeared on Syrian television, he didn’t know that he would end up founding, along with other Syrian colleagues –Ayham al-Ghareeb, Moussa al Jamaat and Okba Mohamed– the first bilingual magazine in Arabic and Spanish, created and managed by refugees in Spain: Baynana.

On the occasion of the World Press Freedom Day, Casa Árabe and porCausa Foundation organized, last May 5, the presentation of the magazine Baynana on Casa Árabe’s social media. In an interesting debate, presented by Casa Árabe’s International Relations Coordinator, Karim Hauser, we heard the reflections of Carlos Martínez de la Serna, program director at the Committee to Protect Journalists (CPJ), Muhammed Subat, journalist and co-founder of Baynana, and Andrea Olea, the magazine’s coordinator.

Last monday, we celebrated the World Press Freedom Day, although journalist Carlos Martínez de la Serna thinks that there is little to fete: “Last year there was a record number of journalists imprisoned due to their journalistic activity, at least 270. There was also a record also in assassinated journalists for their journalistic activity”, he said. In the midst of this discouraging scenario, Martínez de la Serna finds in the launch of Baynana a reason to celebrate this day. For him, this magazine «is something exceptional».

Baynana means “among us” in Arabic, and aims to give this concept the broadest sense: “us” means everybody, there is no “others” or “them”. Through interviews, reports, photos and analysis, Baynana aims at showing another face of migration, and telling alternative stories, from a perspective that differs from the traditional one in Spanish media outlets. “We want to talk about our common culture, history and tradition, about the things that unite us as a society”, explains Muhammed.

Baynana was born to attend an “unattended” audience niche in the Spanish society. “They wanted to create a media aimed at the Arabic-speaking community of Spain; and at the same time, they wanted to be the bridge not only among the Arab population, but also the migrant and refugee communities in general, and the Spanish audience as well. Especially in a time when the ‘us versus them’ is being used against them”, explains Andrea Olea, coordinator of this project.

PorCausa Foundation, which collaborated in the creation of this magazine, highlights «the approach and quality of the work» of their Syrian colleagues. «In Spain there are currently almost two million people of Arab origin. Information is a fundamental right in any democracy, but many of these people find it difficult to inform themselves», says porCausa. In order to continue doing journalism, this small media has launched a crowdfunding campaign you can support through Goteo.

Being a reporter in Syria

The road to Baynana’s launch wasn’t easy for these Syrian reporters. With  many difficulties to exercise journalism, they realized that Syria needed people to tell what was really happening in the country. «We really wanted to do something,» recalls Muhammed.

Nevertheless, in Syria, one of the worst countries for press freedom –173rd out of 180 countries in Reporters Without Borders’ 2020 ranking–, his life soon began to be in danger because of his journalistic work.

“I was shot in the leg while working on a story and I had to stay in bed for almost eight months, but I kept working”, says this Syrian journalist. Muhammed was lucky not to lose his leg when he was wounded, but two of his brothers ended up maimed by the war, losing one leg each.

Another Baynana member, Ayham al Ghareeb, was unable to be present and accompany his wife at the birth of one of their daughters because he was imprisoned due to his work as a journalist. Al Ghareeb spent a total of nine months in jail.

When the Al Assad regime’s army took control of the area where they lived, they had to leave. «We could not stay in Syria. Our lives and the lives of our families were in danger. We had to pack our bags in five minutes, say goodbye to our families and leave,» Muhammed recounts.

The arrival to Spain

Finally, despite all the obstacles and difficulties they faced on their journey, and thanks to the evacuation plan coordinated by the Committee to Protect Journalists with the collaboration of several European governments, the four founding journalists of Baynana arrived in Madrid in May 2019.

The language made for a difficult barrier at first –Moussa, another member of the project, says he barely knew how to say ‘hello’ in Spanish– but, little by little, they began to learn. They also progressively found the similarities between the Arabic and Spanish cultures. For Okba, the fourth and youngest of Baynana’s creators, Spaniards and Syrians are similar in the time people take when giving directions on the street, and in the pleasure they find in good conversations.

The search for this union, for bringing cultures closer together, led them to found Baynana. Carlos Martínez de la Serna reminds once more the exceptional nature of this magazine, that he believes to be an “indispensable” project. “In the cases in which the exile of reporters is achieved, most of the time they stop doing journalism. They have avoided the main problem (death), but we are left without their voices», he explains.

👇👇👇 is one of those projects that reconciles us with our humanity. We are so very proud of our Syrian colleagues, who have created the first, bilingual newspaper done by refugees in our country. Please help us make this dream true and lasting. https://t.co/odgUGMhpEX

“In Spain is a diverse country,but there is not enough diversity in the news media outlets. Baynana proves that it is possible to make a new kind of journalism that shows the diversity of the Spanish society in a better way”, Andrea Olea concludes. Initiatives such as Baynana help people feel more included in society, as well as “to be perceived in a broader and more complex manner”.