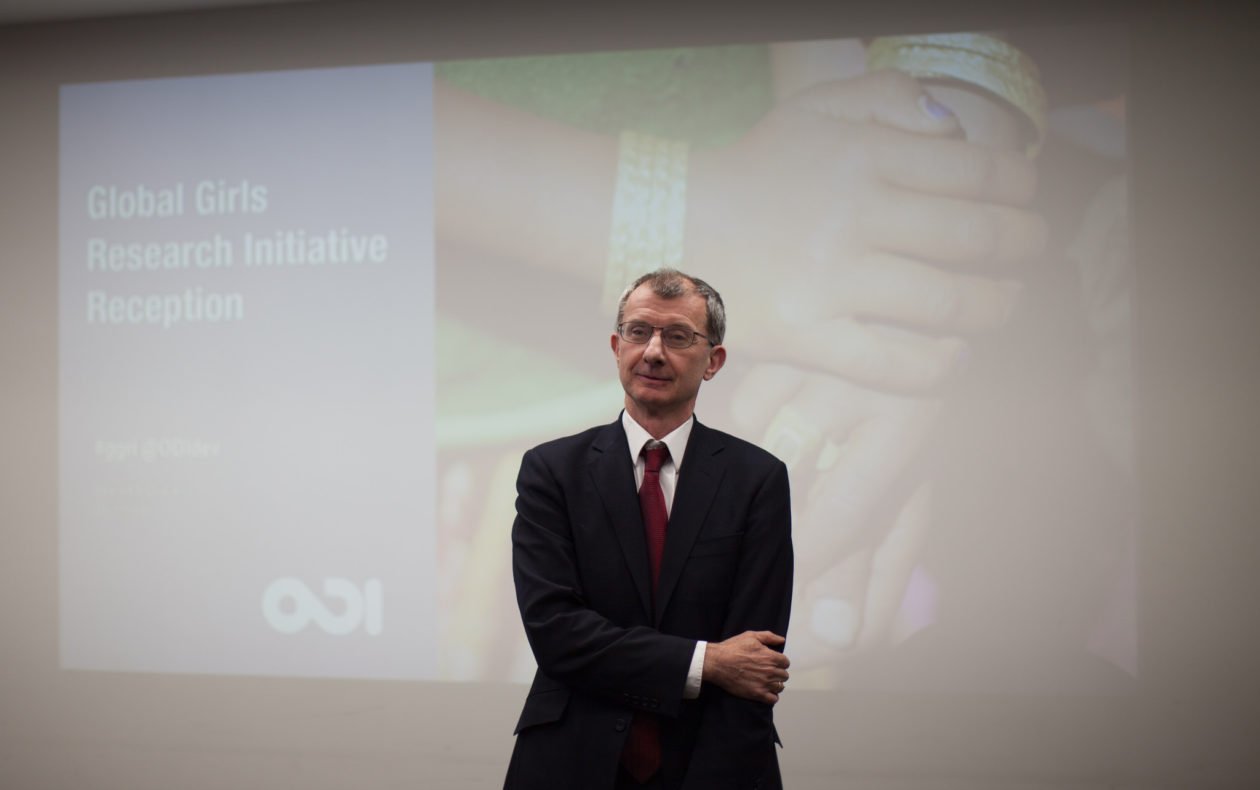 Kevin Watkins during launch of the Global Girls Research Inititative at the ODI's office.

ODI’S Executive Director warns about the lack of connection between governments view and the true nature of refugees and migrants movements.

Kevin Watkins’ career comprises more than thirty years of experience in international relations and foreign policy in some of the most renowned British and international organizations. Nowadays, he speaks clearly of the dramatic current migration issues and the unefficient answers to those problems. He currently gives his opinion as Overseas Development Institute (ODI) Executive Director, the UK’s leading independent think tank on international development and humanitarian issues. Although he will take over the same position in Save the Children UK next 28th of September.

Watkins explains why European migration policies are too restrictive and continuously fail when it comes to guarantee refugees’ and economic migrants’ human rights.

The ODI is launched report where you basically state that policies at destination countries do not determine the decisions to migrate. This is done in the context of an ever­tightening policy-making process. How do you think the British or any other government in the EU should react to this? What impact do you expect?

The point that we make in the report is that there is a disconnect in the real world between the way governments are viewing the migrant and the refugee challenge and the realities that drive people to migrate or to move as refugees. So if you ask most policy makers in most European countries, their primary concern is to prevent people moving,  it’s to make it difficult for them to enter the country whether it’s at the border or by denying access to labor markets, to asylum claims and so on. And there is a presumption on the part of many political leaders that people are driven by a concern to secure welfare benefits in Europe.

But also there are many people who are moving because of aspiration, in some cases because they previously fled, say from Syria to refugee camps in Turkey or to a camping in Lebanon where they had no opportunity to have their children educated where the circumstances are deteriorating, where they may know people who have moved to Europe.

And as a result of that, they see an opportunity. And basically refugees and migrants are doing what any of us would do in that situation. You strip people of the right to educate their kids, to get access to health care, of the dignity and security that comes with a job and people will move. So the point that we are making to policy makers in Europe is that you need to gear your response to the real world of refugees and migrants and not to the fictionalized world which is full of prejudice and assumption and the absence of evidence that it currently framing the policies.

Peter Sutherland today described EU’s approach to the refugees’ crisis as “inept and xenophobic”. Do you agree with this?

Well, perhaps he was being kind. I think…you can’t look at the EU’s response as a whole, I think European governments have a different record in this area. One government, Germany, stands out as a country that has been very generous and open and has met its international obligations to refugees, and Sweden has been relatively open, there are other countries which I would argue have clearly violated the European Convention on Human Rights and violated the Convention on the Rights of the Child by putting up barbed wire fences, by failing to make provisions for highly vulnerable children, in some cases by turning their backs and allowing children to drown.

These are gross violations of human rights which they should stop attaching diplomatic tags to. And there are still other countries of which the UK is one, that already has good record on responding the crisis on the region, putting money into education, into opportunities for people who fled the Syrian conflict and now are living in Jordan, Lebanon, and Turkey. But we have a very poor recording terms of taking in refugees in the UK, we have only taken, I think, two to three thousands. That is not a response that’s appropriate for a country of the UK scale and standing of financial resources.

There are other countries which I would argue have clearly violated the European Convention on Human Rights and violated the Convention of the Rights of the Child by putting up barbed wire fences, by turning their backs and allowing children to drown.

Does the ODI have a position on what the response, the alternative should be?


We are a think tank so we don’t have an institutional party­line position but I think any detached observer that looks at the situation the way the authors of our report have done are driven to certain conclusions: what we clearly need in Europe is a response that makes it possible for refugees to enter the EU safely, for their claims to be processed efficiently, where claims for asylum are legitimate they should be properly accommodated, and if not they should be humanely and reasonably treated with respect to repatriation. So we set out the agenda in the report which basically captures that.

We hear a lot in Europe policy makes on the War on Smugglers, on the war on people traffickers, but it’s actually the EU and its governments that are creating the market for smuggling and creating the market for human traffickers by making it so difficult to enter Europe. They are incentivizing criminal gangs to invest in third rate dinghies which endanger the people lives crossing the sea to Greece or into Italy. If you really want to declare war on traffickers and you really want to declare war on smugglers, you need to take the floor out of the market and you do this by providing safer passages, not by building fences.

Why do you think that this is an area, migration in general, where development organizations have been so absent in the past? Because the ODI is one of the very few institutions that are actually having an active research agenda on the issue and most of the international NGOs have been reactive. Giving the relevance both in terms of threats and opportunities of this issue. Why do you think the development community has been absent so far?

I think there are two primary reasons. The first one is that a lot of the great development campaigns of the past ten years, if you think back, whether you’re talking about aid or debt relief for health initiatives to save lives of women and children. They are all to do with problems over there which they not our problems and which we should respond sympathetically and generously. It’s what I would describe as arm-length problems. I think the migration crisis is the demonstration of the fact that we are living in a very different sort of world, where the connections between countries and people are deeper than they’ve ever been.

If you get into questions of migrations and refugees status they are very politically contentious and a lot of people don’t like it or don’t want to take on the issue. I think many NGOs probably fear their funding base if they take up this very popular cause.

And it’s no longer possible to draw a line between rich countries and poor countries and say this is a development problem, and this is a rich country problem. What is landing in Europe’s own backyard is the consequence of social breakdown, of violence and conflict, of aspiration and ambition. And of the links between the very rich part of the world and desperately vulnerable and poor parts of the world. I think aid agencies and nongovernmental organizations have been very loathe to take up those issues because they are more complicated.

And I think frankly as well because they are politically less comfortable. Nobody in their right mind, whatever their political disposition, is in favor of allowing children to die in Africa, or people to go hungry in South Asia. But if you get into questions of migration and refugee status they are very politically contentious and a lot of people don’t like it or don’t want to take on the issue. I think many NGOs probably fear their funding base if they take up this very unpopular cause. People who donate to stop people starving in another part of the world might not be the people who’ll support an organization that is championing the right of refugees and migrants.

Gonzalo Fanjul made this interview in London, February 2016, during ODI’s report Journeys to Europe presentation. PorCausa foundation contributed to this research by interviewing migrants in Madrid during 2015 summer.

This interview’s author, Gonzalo Fanjul, is founder and codirector of porCausa foundation, and ODI’s research associate.

Kevin Watkins is also a member of porCausa’s board.